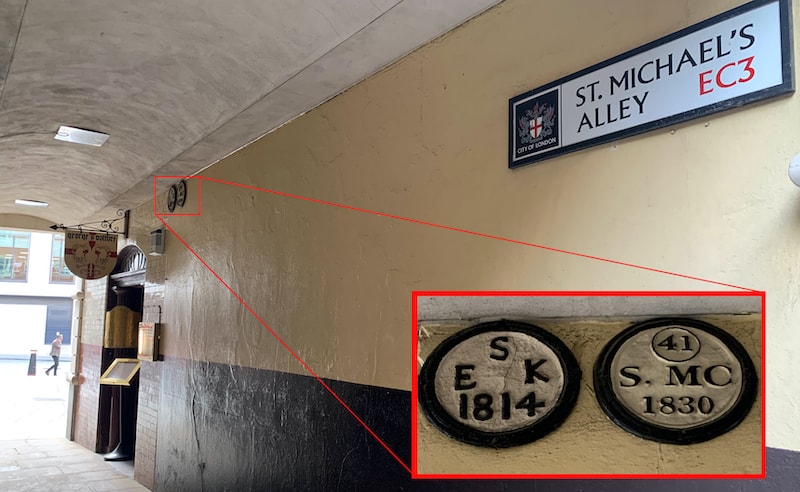 The Archangel Michael, in the Catholic Church, is the leader of the Army of God in their triumph over the forces of Evil. He is also an important figure for Jews and Muslims. But in cockney rhyming slang – the native patois of the City – Michael has other associations.  I apologise in advance if I offend any religious sensibilities by calling this walk “Taking the Michaels”. The phrase means to tease or make fun of something. It was originally “Taking the Mickey Bliss” which is cockney rhyming slang for taking the piss.

Anyway, it is not my intention to mock – far from it. For on this 3.4km walk we discover the lost seven churches dedicated to St Michael, of which only 2 remain today. There is nothing I wish to make fun of, but there is fun to be had as the walk starts and finishes near Leadenhall Market.  Around here, other little alleyways conceal some very old pubs and restaurants which are so traditional as to be legendary. This truly is the heart of the City.

We start at the church of St Michael Cornhill which is just a short walk up Cornhill from Bank Tube. This churches origins are pre-Norman and appears on the Copperplate Map of 1555. It was rebuilt by Wren in 1672 after the Great Fire. The top parts of the tower are by Nicholas Hawksmoor.  There is a fine statue of St Michael outside the blue door which is a memorial to the fallen in WW1.

Now walk down St Michaels Alley past the Jamaica Inn. This pub is a city institution known colloquially as “the Jam Pot” . The nearby restaurants of the George & Vulture and  Simpsons Tavern in Ball Court are also famous City watering holes which have changed little since Dickens time – including the menus. Maybe at the end of the walk you might want to return here to try out the “Stewed Cheese” in the oldest chophouses in London.

Continuing down St Michaels Alley in the covered section you will find a parish marker showing the boundary between St Michael Cornhill and St Edmund King & Martyr. You will see the latter church when you emerge into the sunlight. Now turn left onto Lombard Street and then right at the crossroads onto Gracechurch Street. Follow this down to the big intersection with Cannon Street.

Now walk east along Lower Thames street and cut down to the Thames River path. Follow this west along the river bank to the memorial to the German Hanseatic League at Steelyard and go under Cannon Street station to walk up Cousin Lane. As a fun side trip, when you see the Banker pub, go down the steps to the Thames Foreshore. If the tide is out, you can walk down here and who knows – you may find some buried treasure. Many ancient coins have been picked up from these shingle and mud flats.

Continue up Cousin Lane, cross over Upper Thames Street along side the station and go down College Street. Note the boundary markers for the lost church of St John the Baptist and St Michael Paternoster on the wall. Once past the church of St Michael Paternoster if you go a little way up College Hill you will see some more boundary markers – this time for St Thomas the Apostle and St Michael.

Now head down Skinners Lane and Little Trinity Land past the church of St James Garlickhythe. As you approach the corner of Little Trinity Land beneath the underpass you will see a marker for St Michael Queenhythe on the wall above the loading bay. You now need to find you way down to the noisy Upper Thames Street and walk under the underpass. Immediately on the other side you will find a little alleyway leading up hill.

The church of St Michael Queenhythe stood on this corner. The Saxon word “hythe” means landing place or harbour. The parishes of the churches along this stretch all fronted on to the Thames providing useful revenue from the maritime trade. As you walk up the hill, on the left you see Cleary Garden  – the site of a Roman bath house.

Now cross the busy road of Queen Victoria Street and go all the way up up Bread Street crossing Cannon Street and and turn left down the ancient Roman road of Watling Street which went all the way to Wales. This brings you out onto New Change which runs past the boundary of St Pauls. Halfway up this street on the wall of the St Pauls Choir School you will see two boundary markers for St Michael le Querne and St Vedast Foster Lane. St Michael le Querne stood at the junction with Cheapside, where the octagonal building that houses the St Pauls Co-op Convenience Store is today.

The word “Querne” means a stone used for grinding corn. The church was also sometimes known as “St Michael ad Bladum” – bladum meaning wheat as in the French ble.  Both names reference a nearby corn market.   It was destroyed in the Great Fire and not rebuilt. This boundary marker is it’s only visible remnant. The parish was combined with St Vedast.

Now head north up St Martin’s Le Grand and turn right into Gresham Street. Pause when you reach the third road on the right – Wood Street. This corner, where No10 Gresham Street is, is where the church of St Michael Wood Street stood. The map above printed  1899 shows it clearly although it was actually demolished two years earlier in 1897. I have been unable to find any parish boundary markers for this church lost church. The photo below shows what it looked like just before demolition.

Continue on down Gresham Street past the church of St Lawrence Jewry and turn left up Basinghall Street. Go up past the Guildhall Buildings on your right and you will come to a memorial plaque marking the site of the lost church of St Michael Bassishaw. “Basinghall” is a corruption of this original name which meant the yard or “haw” of the Basing family – Basing’s Haw.  This was another Wren church rebuilt after the Great Fire but demolished in 1900 due to its weak foundations.  Continue north up Basinghall Street and turn right onto Basinghall Avenue to find two parish boundary markers for St Michael Bassishaw and St Stephen Coleman Street.

Now go down Coleman Street heading back toward Bank. Cross over and go up Cornhill to end up back where you started. You’ve done it! You deserve a reward. Either sample the delights of the Old City in Simpsons Tavern or the Jam Pot. Or go to the end of Cornhill to find Leadenhall Market with plenty of interesting restaurants in a beautiful setting.

1 thought on “Taking The Michael”