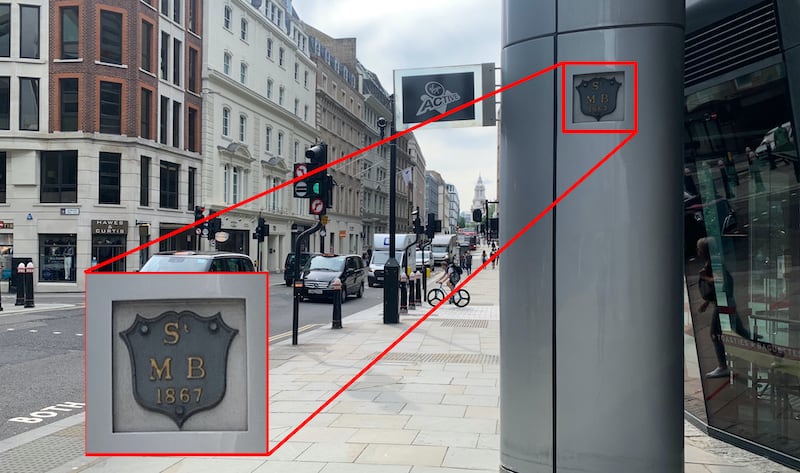 Google Map of “All the Marys” walk

In 1500 there were 15 churches in the City of London dedicated to a St Mary. St Mary was by far the most popular dedication with the next most poplar being All Hallows (8 churches) and St Michael (7 churches). This, of course, was helped by the fact that there are two St Marys – Mary the Virgin, the  mother of Jesus and Mary Magdalene one of Jesus’s followers who was present at the crucifixion. But even if we count only the churches dedicated to the Virgin Mary, it is still the most popular dedication with a total of 13.

One other area of confusion, apart from the two different saints called Mary, are the two churches of St Mary Aldermary and St Mary Aldermanbury. The names are so similar that they are often mistaken for each other. The names come from different roots: “Aldermary” being a corruption of “Older Mary” as that church was the more ancient and “Aldermanbury” meaning the “fortified residence of the alderman”. The latter, presumably, was a Saxon official’s house in the ruins of the Roman Barbican fortifications which gave its name to the whole Aldermanbury area.  So, in a celebration of the City’s peculiarities and a nod to this entangled nomenclature, I have decided to call this 4.5 km walk “All the Marys”. You can get a copy of the Ancient Parish Guide Map here

We start (and finish) at the church of St Mary Aldermary which has the fabulous and spacious Host cafe inside and some street food stalls outside. A good place to meet beforehand and have a coffee while you wait for the other walkers – or grab some food to sustain yourselves afterwards. The church has some literary connections – Geoffrey Chaucer’s father was buried there and Milton married his third wife in this church.

Come out of the church and walk up Bow Lane to Watling street. This unprepossessing little street was a major Roman road that connected Dover (now the A2) to Wales. Walk a few steps down it towards St Pauls and look on the wall of the pub called The Pavilion End to find a boundary marker for St Mary Aldermary. There are plenty of other boundary markers like this on the walk – too many to mention but have a look at the Cheapside Treasures walk for more details. Just keep your eyes open and see how many you can spot.

Now continue up Bow Lane to find the church of St Mary le Bow. There was a Saxon church on this site that was destroyed in a freak tornado in 1091 AD. This famously is the church that determines if you are a true cockney (Londoner) or not; you are if you were born “within the sound of Bow Bells”. The bells could be heard as far away as Hackney marshes before modern traffic drowned them.  The ‘bow’ in the name refers to the bow shaped arches in the crypt.

Continue west up Cheapside and turn right up Gutter Lane at the top of which you will find the garden on the site of the lost church of St John Zachary. To the right of this garden is Staining Lane. Walk up this street to discover the site of St Mary Staining which was also lost in the Great Fire. The origin of the name ‘Staining’ is disputed. It could refer to the nearby livery hall of the Painter Stainers, or a family called Staines who owned properties nearby. Another possibility is a reference to the Saxon word for ‘stone’, which would have been unusual because most Saxon churches were made of wood.

Now duck under the modern building into St Albans Court, named for the church of St Alban Wood Street whose remaining tower you will see in the middle of the road, and go down Love Lane to find a garden where the church of St Mary Aldermanbury once stood. This Wren church was gutted in the Blitz, but the stones were transported to Fulton, Missouri in 1966. The church was rebuilt there in the grounds of Westminster College as a memorial to Winston Churchill who made his famous “Iron Curtain” speech in that school in 1946.

Now go down Aldermanbury and turn left onto Gresham street, past the church of St Lawrence Jewry and then turn right down King Street. Up above the left of the entrance to Atlas House at 1 King Street  you will see two boundary markers for St Martin Pomeroy and St Mary Colechurch. Continue down to Cheapside and go east towards Bank tube. On the corner of Cheapside and Old Jewry you will see a blue plaque which marks the site of St Mary Colechurch, named after a Mr. Cole who paid for its construction. This was another church lost in the Great Fire of 1666 and not rebuilt.

Continue on down Cheapside until you get to the Mansion House. Look on the wall near the sign for Wallbrook and you will see another blue plaque, this time for St Mary Woolchurch Haw.  The name comes from a weighing scale set up in the church yard used to measure bales of wool. “Haw” means yard in Old English. This is another of the six churches dedicated to St Mary that was lost in the Great Fire of 1666 and never rebuilt.

Now walk towards Bank tube and turn right down Lombard Street and you will find yourself facing the unusually distinctive west front of St Mary Woolnoth. The design by Nicholas Hawksmoor is unlike any other church in the City with the top splitting into two square turrets that make it look a bit like a fortress. It was almost demolished to make way for Bank tube in 1900 but was saved by public outcry. Bank station is now right underneath the church’s floor, reinforced by steel girders.

You must now take a fairly long walk through Pope’s Head Alley over to Threadneedle Street and up onto Bishopsgate before turning right to face St Helens Bishopsgate. This is one of the churches that was untouched by the Great Fire and its exterior walls date back to medieval times.  It was Shakespeare’s parish church when he lived nearby in the 1590’s. But we must pass it by to continue on our quest for St Mary Axe. The latter gave its name to a whole street and to one of Londons most iconic buildings – the Gherkin – whose formal name is  “30 St Mary Axe”. To find the blue plaque marking the site of the church of St Mary Axe look on the wall of Fitzwilliam House at number 10. The church was demolished all the way back in 1561. How strange that one of the earliest ancient churches to be lost is still found and celebrated in one of London’s most modern glass towers.

Keep waking south down St Mary Axe into Lime Street and slip between the Willis towers and the Scalpel to emerge half way down Fenchurch Avenue. You should be facing the signs for “The Garden at 120” in Hogarth court. If you have time take the elevator up to the roof garden for some fabulous views of the City – its completely free and one go the best kept secrets of this part of London.  Then zigzag down Fenchurch Street, Rood Lane and Eastcheap to turn down Lovat Lane and find St Mary at Hill. The photo below is actually the east end of the church which you will see if you exit through the church into the street called St Mary at Hill.

This church was rebuilt by Wren after the Great Fire and has had some substantial alterations since. It survived the Blitz intact only to be severely damaged by a fire in 1988. The pews were not replaced, so the beautifully proportioned square interior is shown to its best advantage.

Opposite the entrance to St Mary at Hill you will find Botolph Alley which leads on to St Georges Lane. These two streets commemorate two lost churches:  St Botolph Billingsgate and St George Botolph Lane. You need to pass through them to turn up Pudding Lane and on to Eastcheap and Cannon Street. Little way down you will find Abchurch Lane and a little jewel of a Wren church: St Mary Abchurch. It has beautiful carvings by Grinling Gibbons and a stunning painted ceiling – almost like a little Sistine Chapel. This is the home of the “Friends of the City Churches” charity if you feel like making a donation.

Next it’s on down Cannon Street to the railway station. At the entrance look up above the doorway to the M&S food store to spot the two boundary markers to St Swithin London Stone and St Mary Bothaw. The latter stood on the site of this station as the blue plaque at the western most entrance to the station above the steps attests. Also look closely at the steel clad pillars of the ribbed building opposite the station entrance. You will see some inset boundary markers here also for St Mary Bothaw.

Go down the side of Cannon Street station into Dowgate and into College Street past both the churches of St Michael Paternoster and St James Garlikhythe in Skinners Lane and then down to walk alongside the busy main road of Upper Thames Street. This will bring you to St Mary Somerset which was demolished in 1871 and only the tower remains. There are plans afoot to turn this tower into a private residence – although surrounded by roads it might prove to be a bit noisy!

Now head up Lambeth Hill to Queen Victoria Street. If you stand on the pavement outside the Fitness First gym facing the church of St Nicholas Church Abbey you are standing on the site of St Mary Mounthaw which was lost in the Great Fire. The graveyard still existed until 1861 when Queen Victoria street was built over it. Sadly a plaque marking the site of the church was lost in the Blitz and I have been unable to find any physical remains from the building. The two maps above from 1676 (marked by the letters “MO”) and below from 1899 show where the church stood and the layout of the streets at that time.

Now walk up past St Nicholas Cole Abbey into Distaff Lane and up through Old Change Court. The site of this lost church is where the flowerbeds are between the Old Change Bar and the modern brick building on the left. Sadly again, there is no marker to commemorate St Mary Magdalene Old Fish Street which was destroyed in a fire in 1886 but we do at least know what it looked like. You can see the location on this map from 1863.  As some consolation, if you walk up towards St Pauls you will find the St Lawrence and Mary Magdalene Drinking Fountain so at least her name is remembered here.

Now it only remains to walk down Cannon Street towards Mansion House and the cafe at St Mary Aldermary where you started.

1 thought on “All the Marys”